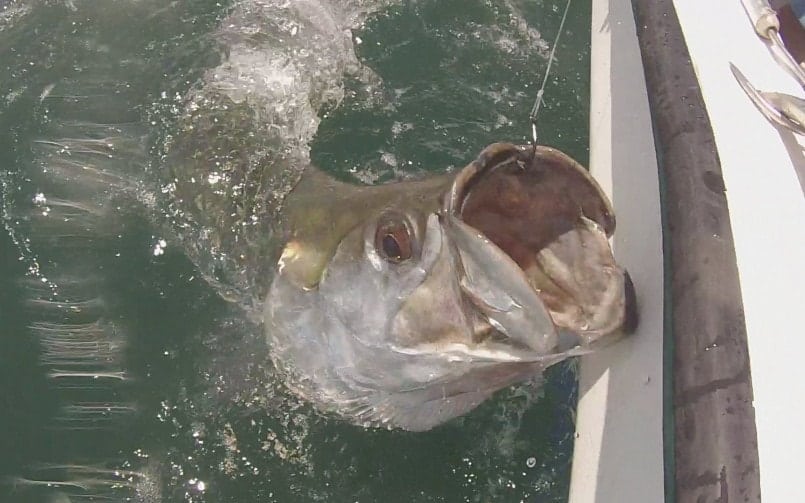 Safe to say my relationship with tarpon has been a bit strained lately.  We got off to a great start – ten years ago I moved to Costa Rica, the silver king and I met, and I’ve been obsessed ever since.  We schedule bi-annual visits, I’ve introduced all my friends, and I have plenty of pictures to remember the good times we’ve shared together.  But like any long distance relationship sometimes even the best laid plans don’t work out and the relationship gets tested.   Now could be one of those times. Read about our experience tarpon fishing in Tortuguero in our Costa Rica Fishing Report – November 2015.

Earlier this month I took one of my best  friends in Costa Rica to meet the mighty tarpon for the first time.  Like me, my friend Nic has been living here for over a decade and although I’ve taken him out fishing a few times he has never fished Costa Rica’s Caribbean Coast and didn’t know much about tarpon.  I told him the most important factor when tarpon fishing in Costa Rica is the state of the Caribbean Sea; if it’s calm chances are you’ll run into tarpon just offshore but if it’s rough and you can’t get out of the treacherous river mouth the odds heavily shift to the tarpons’ favor as you’ll be forced to fish the fresh water canals.  Most anglers know that Mother Nature, especially the Caribbean, can be wildly unpredictable but your chances of having good conditions increase if you come during the months that fall under tarpon season in Costa Rica.  The best time for tarpon fishing in Costa Rica is generally mid-January through mid-May and then again in September and October, which constitutes the beautiful albeit short dry season on the Caribbean Coast.

One of the various jungle rivers emptying into the Caribbean

In my most recent trips to the Caribbean I had almost humorous bad luck with the weather in the sense that it would be funny if it wasn’t happening to me all the time.  Last May my right hand man and Operations Manager of Central America Fishing, Alejandro, and I fished with Primo but the seas were up and we had to anchor in the mouth of the Rio Colorado and take our chances with passing tarpon.  I hooked a giant who quickly straightened the treble hook on the rapalla after one jump while Alejandro released his first tarpon but that was it for the day.  This March I visited the famous Rio Parismina Lodge, one of the best tarpon lodges in Costa Rica and home to four different world records.  The week before I went they were jumping twenty tarpon a day on glass calm seas, but the week I was there we were stuck inside the river for three straight days due to unseasonably rough seas and didn’t see a single tarpon.  My friend Nic and I were fishing November 1st, right at the very tail end of tarpon season, but I had a good feeling about the day.

As our Cesna plane landed in the Caribbean port town of Limon to drop off one passenger before continuing on to Tortuguero  I could immediately see it was going to be a gorgeous day.  The sun was shining, the ocean was calm, and my good friend and top tarpon guide ‘Primo’ was going to be waiting for us at the hotel.  We arrived at the beautiful Pachira Lodge, dropped our bags off, then more-or-less sprinted to the dock where Primo was waiting for us with his big smile and his trusty 23’ White Dove. We exchanged a big ‘man-hug’ as we always do and off we went – we could talk on the boat while we were fishing, no need to waste time exchanging pleasantries on the dock with no lines in the water.

We cruised out of the river mouth without any issues and within minutes Primo had spotted rolling tarpon.  He hooked Nic up to a Shimano spinning rod with a sardine strung through a circle hook while I went to the bow and started chucking a 6” popper.   I didn’t care if my hook up chances were lower using a surface plug, I’m a popper addict and seeing a tarpon crash it is just as exciting (if not better) than releasing it.  It didn’t take long, on my fifth cast a hole appeared in the water just behind my popper as an 80 lb tarpon missed it twice before moving on.  About two minutes later Nic’s reel screamed and he instinctively picked it up, set the hook, and then began his first dance with the silver king.  After three big jumps Nic’s tarpon went deep and proceeded to show Nic why sometimes it is more fun to jump a tarpon than actually fight it and release it.  Twenty five minutes later we had his 90 lb tarpon boatside, snapped a pic, and successfully released it.  The hard part was out of the way – the rookie got his first tarpon now it was time to light them up, and on this sunny calm day why would we not?

Primo helping my friend Nic with his first ever sabalo real – tarpon!

The answer is because they are tarpon, and they don’t give a sardine’s tailfin what good vibes you are feeling or that you “are due” for a good day.  From 8 AM to 12 PM we hooked into another nine tarpon, all of them peeling off 60 lb braided line at incredible speeds followed by gravity defying jumps.  The problem was, as is often the case with tarpon, a hooked tarpon doesn’t stay hooked for very long.  Their tough mouths are hard as bone so it’s tough enough to set the hook in the first place, then once you do you need to remember to ‘bow to the king’ during their frenzied jumps so their sharp gill plates don’t cut your lines.  That, and 100-150lb fish that jump six feet in the air tend to wreak havoc on any rig in general. With each tarpon jumped and lost our mood began to change from “there’s going to be fish all day long” to “we better land another one of these…”  And so it went, tarpon after tarpon inhaled our sardine, peeled off line, jumped once or twice, and returned an empty hook to us.  The tarpon in Costa Rica are generally very large anyway, 80-100lbs is normal, but I couldn’t believe the size of each and every fish we saw that day.  It was if each fish got bigger as the day went on, like they were daring each other under water to take our sardines without being hooked.  I knew we were in for a tough day when Primo and I both had our reels scream at the same time, had two tarpon jump simultaneously, and then we quietly reeled in our circles hooks – somehow latched on to each other as if the tarpon sent them back to us nicely packaged with a bow tie and thank you note. I couldn’t believe it, I finally had picture-perfect fishing conditions I had been waiting for, the tarpon were everywhere and were going after our sardines with a vengeance, and we only boated one out of the ten we jumped.  Right about noon the bite died, and even a nice sized yellow-tail jack didn’t alleviate our concern that we just missed out on an epic tarpon bite that morning.  We ate lunch, drank a few cold beers, tried our individual superstitious rituals, but the tarpon weren’t around.  To Primo’s credit, he kept fishing hard putting us in current lines and over reefs where he usually finds tarpon – but the afternoon was long, hot, and quiet.  The sun was getting low and I figured we’d just end the day on that note, incredible morning of missed chances followed by a sleepy afternoon , but then Primo shouted “Whoa!”  To hear your fishing guide of 10 years get excited like that it must have been something good, and sure enough there is a school of 40-50 tarpon rolling and jumping 200 yds away headed in our direction.  All hands were on deck and we were ready to go out on a high note as we drifted into the school and waited for a reel to scream… but it never did.   The school passed us without a single bite, that’s it, stick a fork in us, we were done.  We wasted our chances in the morning, took the bite for granted, and didn’t get another shot the rest of the day.  Better luck next time, come back in the spring.

Earlier in the morning I asked Primo what size leader he had on because I noticed it was thicker than most everything I typically fish with, and he replied he had all the rods rigged with 200lb mono leaders.  I thought it was a bit overkill, but he’s the expert captain with 25 years of experience so I didn’t say another word.  After the school of tarpon passed us I was resigned to accept our fate, but Primo kept floating the boat in the current line a couple more times.  It was a beautiful evening and the beer was still cold, I wasn’t in a rush to get off the water back the hotel anyway, so I went along for the ride even though I was sure our day was done.  Just then, my reel screamed as loud as it has all day.  I was ready, gave it a couple seconds to position the circle hook for the set, then I started to reel.  The line went tight, a hole in the water appeared like someone threw a grenade behind the boat, and Primo and I both gasped “Whoaaa…” as we saw a 200lb tarpon sky out of the water.  Despite the adrenaline rush I remembered to bow to the king, but it didn’t matter.  He was a goner too.  This time I didn’t even reel back an empty hook, that hog of tarpon snapped right through the 200lb leader like it was 4lb test.

The Silver King showing off…

Dehydrated, hungry, depressed – we headed back to our hotel after absorbing one of the worst butt whoopings I’ve received on the water.  I waited so long to see my beloved tarpon again, got lucky with perfect late season conditions, and instead of enjoying the day with my beloved tarpon we left the clear losers of a lopsided battle.   Doesn’t matter,  I’ll be back, I’m even more in love with them now than before!