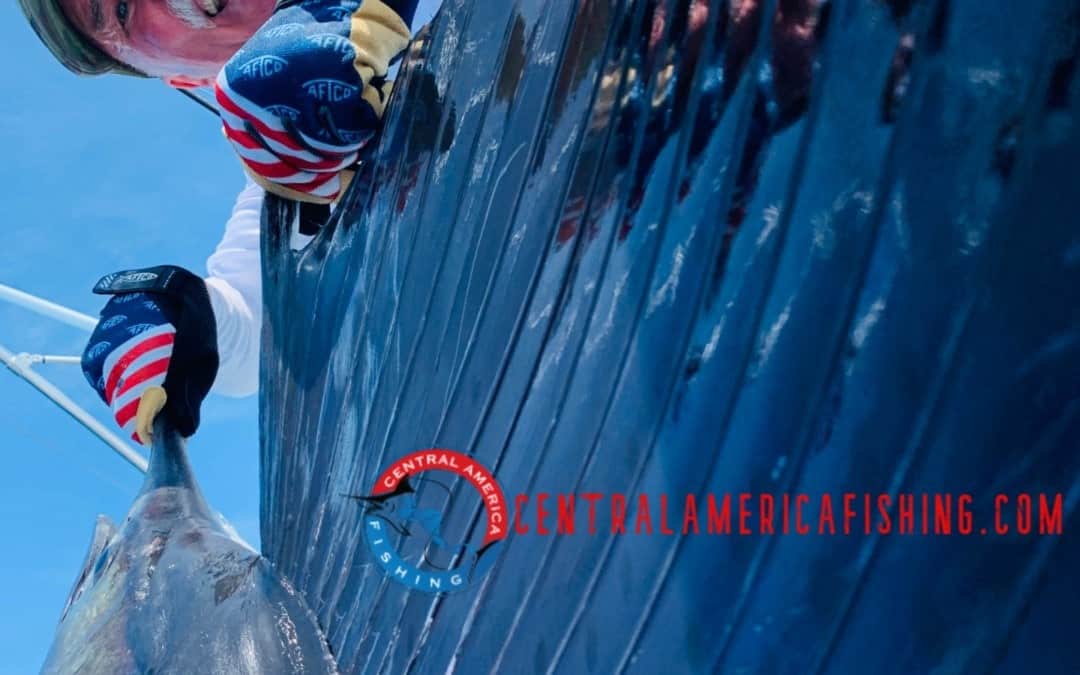 One of the questions we hear the most is, “When is Costa Rica’s peak billfish season?” When planning a Costa Rica fishing vacation, everyone wants their shot at a trophy marlin and multiple sailfish while simultaneously dreading the nightmare scenario of trolling for 8 hours without a single bite. Knowing when to visit is key, but so is knowing where to fish. We are here to help.

While we literally catch sailfish and marlin twelve months a year in Costa Rica, anyone who has been fishing here long enough will tell you that Costa Rica’s peak billfish season is December through April.  Those five months also happen to coincide perfectly with the North American winter and Costa Rica’s dry season weather, or summer, so the weather is perfect, the seas are flat, and the billfish are everywhere.

However the topic becomes exponentially more complex when you begin to factor into the equation not one but two major ocean currents, North American weather patterns, the trade winds, water temps and oxygen levels, and yes even simple geography.  Sport fishing in Costa Rica has been popular for over three decades and there is a reason why marinas were built where they were built, why major billfish tournaments are held in the same spot, during the same month, year after year, and why few places on Earth can hold a candle to the phenomenal billfish numbers Costa Rica reports every year.

Many people incorrectly assume that Costa Rica’s peak billfish season is related to the dry season (Dec-Apr) and rainy season (May-Nov) weather seasons and that the billfish bite slows down when the afternoon rains start in May each year. That is a gross over-simplification of what happens here, and now is a good time to repeat the fishing adage that ‘the fish don’t care if it rains, they are wet anyway.’

Central America’s Pacific Coast is the benefactor being at the confluence of two major ocean currents: the California Current coming from the north and the famous Humboldt Current, or Peru Current, coming from the south.  These two surface currents bring in much needed cooler water to the Pacific Coast of Central America and create a nutrient rich upwelling, which in turn creates and sustains an incredible amount of marine life from baitfish to pelagic gamefish. When these two currents collide, somewhere off of Costa Rica’s Pacific Coast, they form the North Equatorial and South Equatorial currents which flow back out away from the coast into the open ocean.

The other important thing that happens are seasonal strong winds from the Gulf of Mexico and the Caribbean that blow from east to west during the months of Dec through April.  These winds are a combination of seasonal trade winds and cold fronts sent down from the North American winter.  In Southern Mexico they are known as the ‘Tehuano Winds’.  Here in northern Costa Rica they are known as the ‘Papagayo Winds’ after the Gulf of Papagayo.  The same set of winds are also seen blowing across the Panama Canal.

The full picture of Costa Rica’s peak billfish season, and on a larger scale that of all of Central America, isn’t complete until we factor into the equation some simple geometry.  From the west coast of the United States down through Central America we find the Cordillera, a more-or-less continuous mountain range extending from Alaska down to Panama.  There are three main breaks in this range which allows those winds to blast through from the Caribbean into the Pacific: the Chivela Pass in Southern Mexico which creates the ‘Tehuano Winds’, Lake Nicaragua which creates the ‘Papagayo Winds’ in southern Nicaragua and northern Costa Rica, and the Panama Canal.  More often than not, on any given day from December through late March/early April these locations experience daily winds of 20-30 mph, with gusts of 40-50 mph not uncommon.  These winds blow the oxygen-rich and baitfish-rich waters far offshore which essentially creates deserts in the ocean, leaving the sailfish and marlin little choice but to seek better life-sustaining water where the winds are blocked by the mountains.  It should come as little surprise that these locations happen to be Guatemala, western Panama, and of course Central & Southern Costa Rica – all of which rank as some of the world’s top sport fishing destinations year after year.  While strict catch-and-release laws keep the billfish populations here relatively healthy, it isn’t 100% accurate to say the Pacific Coast of Central America is full of billfish, but rather the fish are congregated into certain livable zones. Over the past few decades we’ve simply developed hotels, lodges, marinas, and entire sport fishing industries around it.

A map of the winds that affect Central America, including the three main gaps in Southern Mexico, Northern Costa Rica, and the Panama Canal. These winds are almost a daily occurrence between December and early April every year.

Understanding the bigger regional picture helps us dial in to the question at hand – “when is the best time of year to catch sailfish & marlin in Costa Rica?”  The peak billfish season here is December through April, but with nearly a 780 mile long Pacific Coast, 300+ beaches, and thousands of hotels it can be very hard to know where to stay for your next fishing vacation. A lot of anglers incorrectly assume that because December through April is Costa Rica’s high season for tourism, dry season weather, and peak billfish season you simply can’t go wrong no matter where you stay. Many people also get sucked into the lure of the giant all inclusive resorts that have popped up here in recent years, all of which happen to be located in Costa Rica’s northern region known as Guanacaste.  Without ‘knowing before you go’, it’s those people that book a charter online or through their hotel, get beat up by wind for 8 hrs, and catch little-to-no fish and say “We had bad luck and it was really rough. We heard the fishing was much better in Costa Rica.”

This is the reason why many of our top charters from the Tamarindo and Flamingo area move their boats down to the Marina Pez Vela in Quepos or into Herradura Bay next to Los Suenos for 3-4 months every year.  If you still don’t take our word for it, there is a reason why all the major billfish tournaments like the Los Sueños Triple Crown hosted at the Los Suenos Resort & Marina and the Pelagic Rock Star, Quepos Billfish Cup, and even the huge Offshore Wold Championship hosted in Quepos all take place between January and April year after year.  Costa Rica’s peak billfish season is a glorious time to be out on the water, but knowing where to go could very well be the difference between paying for an expensive and very rough boat ride versus enjoying one of the best offshore fishing experiences of your lifetime.