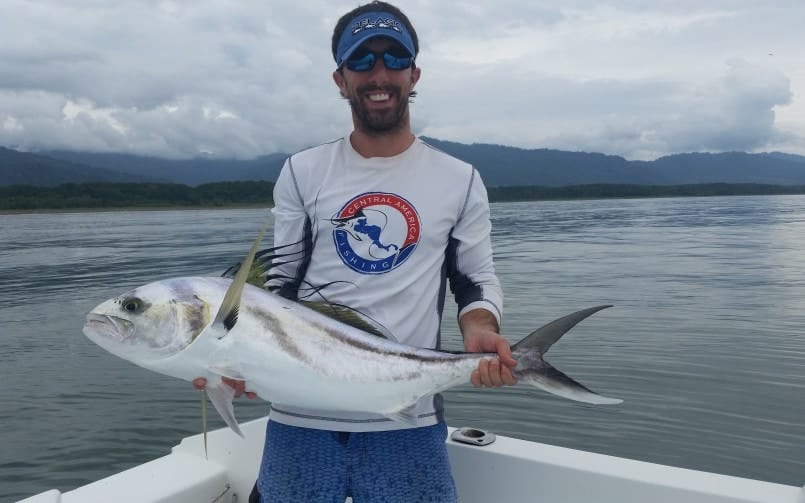 Last week we visited one of our favorite beaches in Costa Rica, Manuel Antonio.  Pristine rainforest, beaches, and so many monkeys you need to close the doors and windows of your hotel room – it never gets old.  That said, the main reason we were there was of course to go fishing. More specifically, we were going to go inshore fishing with our top inshore guide, Johnny.  Below is our Costa Rica Fishing Report – December 2016.

Johnny captains a heavily modified 28′ Apex center console, which has come to be one of the top inshore fishing boats in the country. It features a full slate of electronics, a bimini top for extra shade, large livewell, outriggers, and even a marine toilet. We started the day with a handfull of lookdowns and sardines in the livewell, but we still spent the first two hours of the day fishing sabiki rigs for even more sardines.  Why?  Because the day before Johnny and a few clients released 30 roosterfish – yes you read that correctly! The Pacific Coast was still seeing a fair amount of rain, which was unusual for that time of year, but the fishing reports were still very good last week.  I was expecting to have a good day, but I’ve never heard of rooster numbers like that before, so when Johnny said we’d stop once we had 30 sardines I didn’t question him. The bait of choice for Costa Rican roosterfish – live sardines!

Once we reached 30 sardines we traded the sabiki rigs for Penn spinning gear and headed towards the mouth of the Savegre River. This is one of my favorite ways to enjoy inshore fishing in Quepos – you time the set of waves and motor close to the river mouth, cast your live bait as far as you can towards shore, then power back over the breakers to safer water.  As your live sardine nervously darts back and forth you know SOMETHING is close behind, you just don’t know what.  On any given day it could be a snapper, jack crevalle, sea bass, a roaming roosterfish, or even a 20-30 lb snook!  My first strike didn’t take long, but after giving the fish five seconds to swallow my circle hook it wasn’t there when I reeled it tight. Based on the scuff marks on the side of the fish we guessed it was a good sized snook.  The near miss on the snook was quickly forgotten as Johnny’s reel screamed and we quickly landed the first, and largest, roosterfish of the day – a nice 30-35 lb brusier. The largest roosterfish of the day.

The tide changed, which is all-important for this type of fishing, so we picked up lines and headed north to the Naranjo River to try a few casts there.  The tide of course was the same there so we decided to try some bottom fishing at a few of Johnny’s secret spots.  We dropped our sardines down in 100-120 ft of water and waited for ‘the tug’, which was more like a crash when my rod doubled over.  I reeled as fast as I could and gave it a few hard yanks, but the snapper had already won the battle.  Try as I might, this snapper was as big as it was stubborn and he was already hunkered down in his cave and was not coming out despite a 180 lb man pulling on him with 50 lb braid and a 70 lb leader.  We had to cut the line after 10 minutes of wrestling – hats off to you, Mr. Snapper.

We paused for lunch and then headed north of the Marina Pez Vela to the same stretch of beach where Johnny slammed the roosterfish a day earlier.  I’ve caught roosterfish in murky river mouths and along rocky coastlines and volcanic islands, but rarely along sandy beaches and soft bottoms.  Today that changed as the silence between bites lasted mere minutes, at most.  We landed another four roosterfish here, and missed a few others, along with the first few jack crevalles of the day.  We could have stayed at it until sunset but I told Johnny I was jonesing to catch something for dinner so he obliged and we headed north to the Parrita River Mouth.  We joked, ‘how many countries do you get tired of catching roosterfish that you leave them biting?‘ Roosterfish coming in for a soft landing!

The condition at the Parrita River mouth looked absolutely perfect.  The tide was coming back up, there was a nice umbrella of brown sediment on the top of the water and plenty of baitfish splashing around us.  We proceeded to unload the livewell, bite after bite, the only thing that slowed us down was actually having to reel in and release the fish.  We missed a few more roosterfish bites, but we released 15 jack crevalles here.  The highlight was when Johnny and I had a double hook up and assumed they were both jacks, again, but after releasing my jack I grabbed the other rod and we saw a big red boil and both shouted “SNAPPER!”  With extra caution and precision we got the red snapper boatside, Johnny netted him, and dinner was on!  The day should have ended here but because I’m an addict we kept going, even after we used all the sardines and even the dead lookdowns that were left in the livewwell.  I grabbed the Yo-Zuri crystal minnows out of my box and we tied them on, and the jacks went nuts for them too.  We were literally catching fish about every 50 ft the boat covered, but it was 4 PM and we had a great day, it was time to let Johnny go home to his family and me to my wife.  Final fishing tally – 5 roosters, 15 jacks, and 1 red snapper.

The hot inshore bite continued after I left town, CAF guest Chuck Dieter had a great day with Johnny on Friday landing roosterfish, jacks, and snook.  Johnny’s teammate Alex, who also fishes on a 28′ center console, landed one of the biggest groupers we’ve seen in a long time last week as well.  They don’t make’em like they used to!