When is the Best Time to Catch Yellowfin Tuna? 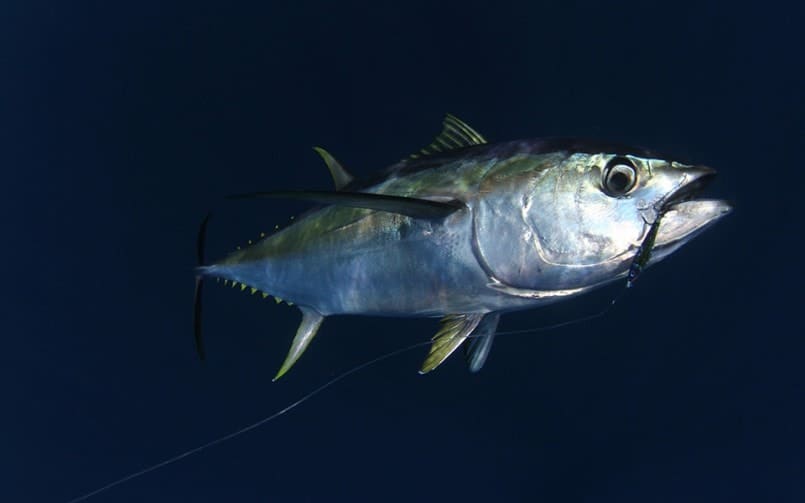 We get asked this all time, ‘When is the best time of year to catch yellowfin tuna?‘  Some anglers have caught enough sailfish to make them sick to their stomach, others just don’t want another brutal fight with a marlin once they’ve already crossed it off their bucket list.  There are others who simply want to go on a ‘meat fishing trip’ and want to catch yellowfin tuna for the sole purpose of eating it, and it’s hard to blame them if you’ve ever tried fresh sashimi, sushi, or tuna steaks with a fish you caught hours earlier.  For the young-at-heart and strong-in-the-bicep crowd, they are after the giant 200-300 lb cow tuna in a real life man-versus-beast tussle.  Last but not least, there are the savant anglers who only want to cast poppers just to see the explosion and deep hole left in the water when a tuna strikes it at the surface.

No matter what type of angler we speak with, they all have the same question – when is the best time of year to fish for tuna?  When you are targeting a specific species it goes without saying that you need to know what time of year to come, you can’t just take a week of vacation and expect the fish to be waiting for you.  Costa Rica and Panama are neighbors so their weather patterns are similar, but just like their cultures there are some big differences we want to tell you about.

Tuna can be (and are) caught year round in Costa Rica, however without doubt the time of year to fish for them is in the green season.  The green season, which runs from May to November, is when Costa Rica experiences afternoon rain showers several days of the week so that is also considered the country’s low season for tourism.  It’s one of our favorite times of years to travel because you’ll get better prices, less crowds, the countryside will return to a lush vibrant green after the 5-month dry season, and the fishing is fantastic.  We also see a lot of wahoo at this time of year, which any experienced angler will tell you can rival tuna in both fighting ability and plate-appeal.

Tuna start to show up in Costa Rica around April to May, with the peak months being June-July-August.  Like in so many other parts of the world, the best way to find them is to find the diving birds or school of spinner dolphin that travel on top of the tuna.  A good captain will get ahead of the school and cross in front of it, so make sure you are ready with the poppers and whoever is holding the rod with the cedar plug has a good grip and dry hands!  Most tuna in Costa Rica are ‘footballs’, tuna in the 10-20 lb range, but 40-50 lb tuna are common and occasionally we’ll see one that hits triple digits.

Spinner dolphins are a good bet to locate yellow-fin tuna!

Panama has perhaps the world’s most famous tuna fishery, and the reputation is well deserved.  Year after year boats full of anglers head out to famous hot spots like Coiba Island and the Hannibal Bank looking to land a ‘cow’ tuna – the monster 200-300 pounders.  These sea mounts and steep banks create a natural buffet setting for traveling schools of yellow-fin tuna looking to feed on sardines and yes, even other tuna.

Like Costa Rica, tuna are caught year round in Panama but there is most certainly a ‘tuna season.’  Tuna start to show up in numbers in March, and seem to slowly increase in size as the dry season ends in April and the green season starts in May.  The best months to target the mammoth cow tuna are May-June-July, then in August the tuna start to taper down in size again.  If you run into a school of 20-40 lb tuna you can fish until your arms give out, but if you lock into a cow on an 80W be prepared for a 3-4 hour fight.