The Billfish of Central America 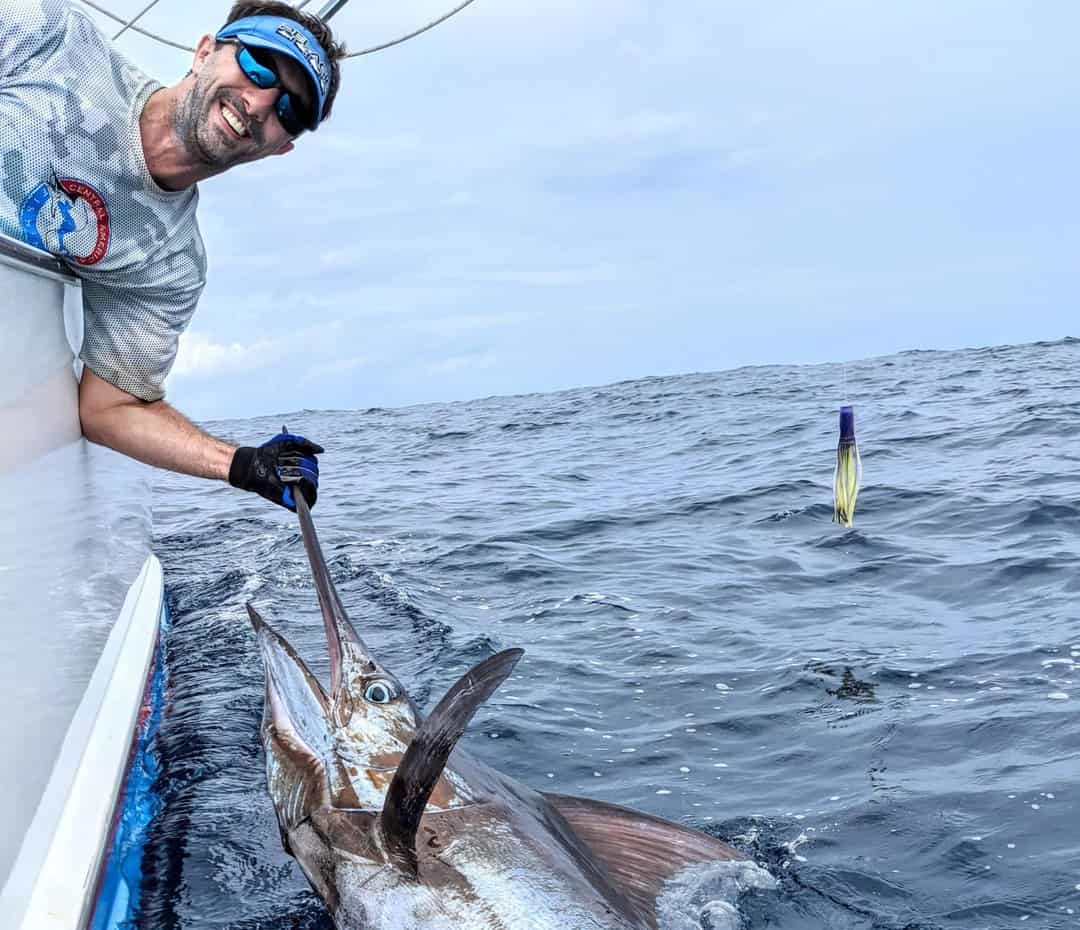 If you’re an offshore angler looking for billfish, chances are Central America is either a place you’ve already fished or it’s high on your bucket list. From Mexico to Panama, the warm tropical waters of both the Pacific and Atlantic Oceans teem with these prized pelagic trophies. This small corner of the world is home to marlin hot spots like the Hannibal Bank & Zane Gray Reef in Panama while Guatemala has earned the nickname ‘the sailfish capital of the world‘. Costa Rica is known as ‘the billfish capital of the world‘ thanks to it’s incredible year round action for both sailfish and marlin. Before you jump on a plane, walk the docks, and slather yourself with sun lotion let’s get to know the billfish of Central America.

Where is the Best Billfishing in Central America?

Central America is comprised of seven small countries that together form the thin isthmus connecting North America to South America. From Guatemala down to Panama, Central America measures just 1,100 miles long yet it’s home to some of the best billfishing in the entire world. On any given day black, blue, and striped marlin can swim into your spread and it’s well known that double digit sailfish are a common occurrence in spots like Guatemala and Costa Rica.

The best billfishing in Central America is along the Pacific Coast. This is mainly due to two major ocean currents that collide there: the California Current coming from the north and the Humboldt Current coming from the south. These major ocean currents bring in nutrient rich water that is full of baitfish, and the billfish aren’t far behind.  With towering mountain ranges to block seasonal winds, that water tends to stay close to the coastline in certain spots like Guatemala, Panama, and Costa Rica. Underwater geography plays a part in this too as the continental shelf is a short run away and numerous underwater volcanoes and trenches serve as hot spots where bait and billfish congregate.

Billfish certainly roam off the Atlantic Coast of Central America too, but their numbers aren’t as prolific and the weather and sea conditions are much less predictable. When billfishing on the Caribbean Coast of Central America any day with a single billfish is considered a success, but a one-fish day would be considered a big disappointment along the Pacific Coast. Better evidence of this is all of the major international billfish tournaments held in Central America, including the huge Offshore World Chamionship, are held on the Pacific Coast. Blue marlin are available on the Atlantic, but black and striped are absent as they are only found in the Indian and Pacific Oceans. In exchange, white marlin are caught in the Caribbean but not in big numbers. The other major difference is that Atlantic Sailfish are much smaller than their cousins on the Pacific Coast, which tend to average 80-100 lbs.

The grand daddy of them all, the black marlin.  The largest and most prized billfish, black marlin are at the top of nearly offshore anglers bucket list.  Black marlin possess an other-worldly combination of size, strength, speed and fury that doesn’t have an equal in the sport fishing world.  While typically bigger than their blue marlin cousins, they are also rarer and therefore more coveted.  The world record black marlin (1,560 lbs) was caught off the coast of Peru in 1953, but in Central America they tend to be in the 400-600 lb range.  That said, granders have certainly been released here and every year there are a few reports of another one getting away.  If you are skilled, and lucky, enough to get one to the boat for a release be sure to pay special attention to their pectoral fins as it’s one of the only sure ways to distinguish a black marlin from a blue marlin: a black marlin’s pectoral fins can’t lay flat against it’s side.

Black marlin typically feed on squid, flying fish, sardines, dorado, mackerel, bonito, and tuna, though some captains say they also have small dolphins and even sailfish on their menu.  Black marlin are highly migratory and can cover thousands of miles in a year.  While typically found offshore, it’s quite common to find them around inshore reefs and pinnacles. Marlin can live as long as 25 years, which makes releasing them safely and quickly all the more important so they can live to be caught again.

The inspiration for everyone from Ernest Hemingway to countless sport fishing logos around the world, blue marlin are the standard of excellence for offshore anglers.  In Central America blue marlin typically range from 250-400 lbs, but fish tipping the scales at over 500 lbs are caught every year.  Furious tail walks, long burning runs, and a gorgeous display of neon blue on their side strips and pectoral fins are trademarks of a blue marlin fight.  It’s this display of colors that earned it the nickname “lady in the blue dress.” Although found in tropical waters all over the world, they tend to be slightly bigger in the Pacific with females growing larger than males.

Like black marlin, the blues typically feed on squid, flying fish, sardines, dorado, mackerel, bonito, and small tuna.  When live baiting for blue marlin few things work better than small bonito – aka ‘marlin candy‘.  Blue marlin also have a lifespan of 20-28 years so they can provide decades of excitement for sport fishing enthusiasts when protected and cared for.

A somewhat rare prize found in the warm Pacific waters off Central America is the striped marlin.  Much smaller than blues and blacks, striped marlin typically are in the 150-250 lb range.  What they lack in size they make up for in beauty and fighting spirit and they spend more time out of the water than the larger blue and black marlin.  Once leadered close to the boat their neon stripes lining the sides from bill to tail are breathtaking, it truly is a beautiful fish.  It can be hard to distinguish a lit up blue marlin from a striped marlin, so pay special attention to the dorsal fin as it’s a dead giveaway.  Striped marlin have dorsal fins that are noticeably higher than blues or blacks, typically exceeding the greatest depth of their bodies.

Striped marlin will feast on squid, flying fish, small dorado, mackerel, bonito, and small tuna.  Trolling ballyhoo or plastic teasers will eventually get one of these beauties into your spread.

When people dream of sportfishing in Central America, chances are it’s this blue water beauty that is dancing in their head.  A terrific fight on light tackle, acrobatic leaps out of the water, and relatively short fight times easily done with stand-up gear make sailfish a favorite for all offshore anglers.  Best of all, their found in hordes!  During the peak season (November through April) double digit days are common with boats out of Costa Rica and the Casa Vieja Lodge in Guatemala sometimes posting reports 20, 30, or even 40+ bites per day.  Pacific Sailfish are typically brown or gray in color, but they can light up and show vibrant blueish-purple strips along their sides and round spots on their over-sized dorsal fin.  Pacific sailfish are bigger than their close relatives in the Atlantic with 80-100 lb fish being the average and 120-150 lb fish a normal occurrence. Sailfish are one of the fastest fish in the ocean and can reach speeds of over 50 mph.  They are believed to live up to 14 years old.

The typical diet for sailfish is squid, flying fish, mackerel, bonito, and small tuna and dorado.  Occasionally bigger sailfish will take a live bonito, but without doubt setting a spread and trolling ballyhoo with plastic teasers is the tried and true method for putting up big release numbers.  Once hooked up with the first sailfish, experienced captains will circle back around in an attempt to hook a second or third sailfish as they are often found feeding in large groups.  Sailfish are so plentiful in Costa Rica and Guatemala that many anglers visit Central America to fly fish for sailfish.

Peak Season (Nov-April) and Green Sesason (May-July), but they are caught 12 months a year.

The rarest of the four marlin found in Central America, white marlin patrol the tropical Atlantic Ocean, Caribbean Sea, and even the Mediterranean.  White marlin are also the smallest of the marlin found here as they rarely reach 200 lbs.  They are unique in that their high dorsal fin, pectoral fins, and anal fins are all rounded and it tends to have more of a greenish color than the other marlins that are black, blue, and/or silver.  White marlin can also showcase white stripes along their sides and have a noticeable lateral line.  Prior to 2001 white marlin and roundscale spearfish were actually considered the same species, and it wasn’t until genetic testing by the Guy Harvey Research Institute that it was determined they were in fact two separate fish.  With that discovery and declining numbers, white marlin were listed under the endangered species list in 2007.

White marlin are at the top of the food chain and will eat squid, flying fish, small dorado, and small tuna.   They are believed to have a life span of at least 15 years.

Although rare, a few times a year our fishing boats do land swordfish.  This highly migratory billfish is typically found in deep water up to 2,000 ft, hence it’s huge eyeballs for low light conditions, but every once in a while you can find them feeding in the top of the water column.  Anytime a swordfish is hooked it’s always a bit of a surprise to the anglers and the crew alike as they aren’t typically daytime feeders and aren’t targeted by charter boats.  Similar to marlin, the largest swordfish are females and are typically over 300 lbs (the IGFA world record is 1,182 lbs caught in Chile in 1953) while males are much smaller.  Swordfish reach maturity around 4-5 years of age and are believed to have a lifespan of only 8-10 years.