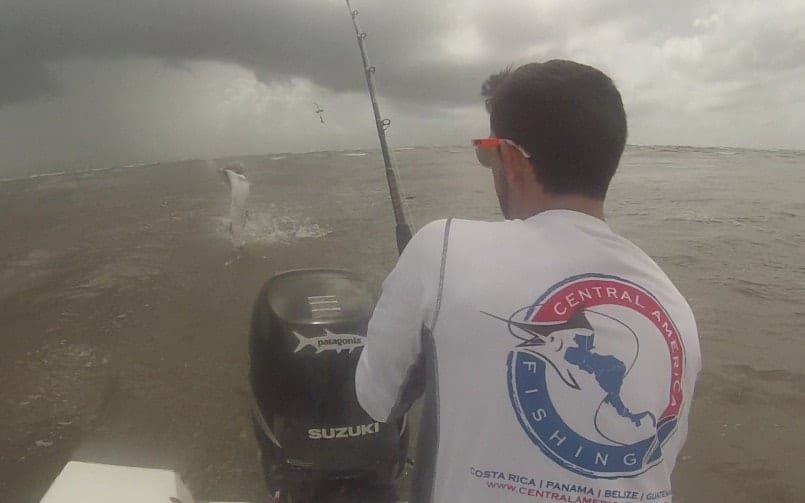 When I started at Central America Fishing I had years of experience in the tourism industry, both in Costa Rica and Panama, but I admit I had spent no time salt water fishing.  Chris told me that was no problem, my main job is to look after our clients and make sure they are happy, plus he reassured me he could teach me how to fish.  After an exciting but frustrating trip fishing for roosterfish in Manuel Antonio, our next trip would take us out to the northeast Caribbean Coast to wrestle with the mighty silver king.

I had never caught a tarpon in my life, and after going 0-3 on roosterfish a few weeks earlier I was already a little intimidated. Chris told me all about how tarpon are probably even stronger than roosterfish, plus they can jump six feet out of the water!  He then went on to explain the differences in the fishing techniques of fishing with circle hooks & live bait for roosterfish versus jigging or trolling with big artificial lures for tarpon.  Then even if you are able to hook a tarpon in their bony mouth, you have to make sure their razor sharp gill plates don’t cut your line or leader.  I knew I was in for a bigger challenge when we went tarpon fishing in Tortuguero. There are two ways that you can get to Tortuguero; either jump on a 30 minute domestic flight or take the ground & boat transportation provided by the hotels themselves.  The flight is as scenic as it is convenient, but the savvy traveler might enjoy the van & boat transfer as you learn about Costa Rican culture, stop for breakfast, then finish the transfer with a one hour ride through the middle of the rainforest on the freshwater canals leading to Tortuguero.  On this boat ride you can see monkeys, tucans, caiman, crocodiles, and for the truly fortunate the occasional manatee.

We took the ground transportation and arrived at the beautiful Pachira Lodge by 1:00 PM.  This is an 80-room eco-lodge located in the middle of the jungle and right on the freshwater canal by Tortuguero.  They feature a big pool (in the shape of a turtle of course), buffet restaurant, bar, and even a spa.  Your room will come with two queen beds, private bathrooms with hot water, and ceiling fans as you fall asleep to the sound of tree frogs chirping in the night. We were picked up the next morning at 7 AM by Primo, one of the best tarpon guides in the country, and after a scenic ride through the canals we arrived at our fishing destination.  Unfortunately the sea was rough that day and we couldn’t get out into the open ocean so we anchored in the mouth of the Rio Colorado and waited for the passing tarpon to find our lures.

Chris got the first bite and it was incredible – a huge 150 lb tarpon that broke his 200 lb leader after one big jump and a quick fight. I was definitely in awe of how big these fish were – much bigger than the jacks and roosters we saw two weeks ago fishing from Quepos!  It wasn’t long after that I got my first bite – fish on!  As I was focusing on my form the 60 lb tarpon I had on was putting on quite an aerial show for us all – scorching runs followed by two or three consecutive jumps 5-6 ft in the air.  My arms were burning as much as the adrenaline was pumping, but I was determined there was no way I was going to lose this fish. Luckily Chris taught me how to “bow to the king” earlier in the week so I dipped my rod every time he took to the air in an effort to throw my treble hook.  As he got closer to the boat and my left hand was nearly cramping up, but his splashing kept me focused that after all this I had to finish the job.  After an intense 20-minute fight Primo had his hand on the leader and it was official – I finally caught my first tarpon!  It was a great feeling that I will never forget, and like my tarpon, I knew I was hooked too.