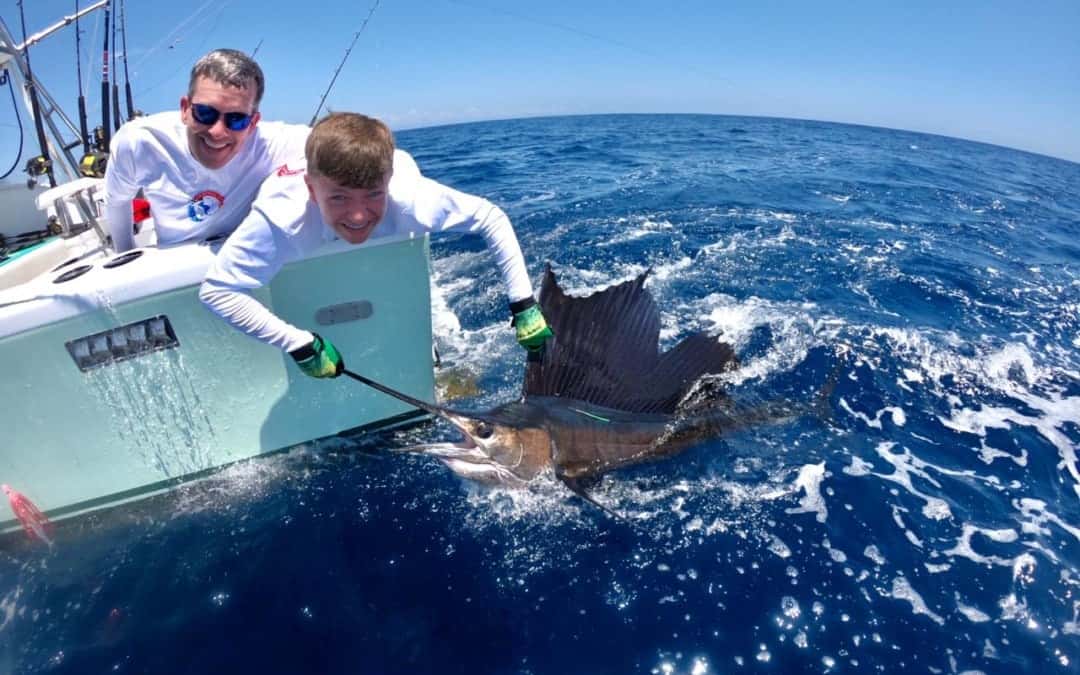 Is this punishment, or is this some twisted attempt at humor?  The offshore fishing in Costa Rica the past three months has been good, with some very good days, but it hasn’t been record setting by most peoples’ standards.  Granted we’ve become very spoiled in the ‘Billfish Capital of the World’ when we react to 5-10 sailfish bites a day with a solid ‘ho-hum‘, but we’ve simply seen better. Fortunately the first three months of our peak billfish season were aided by a rebounded yellow-fin tuna population and and plenty of dorado, so even if boats weren’t reaching double digit sailfish bites anglers were still returning to the docks happy.  Our Costa Rica Fishing Report – March 2020 details the action from last month before the historic and unprecedented shutdown of the world-wide travel industry.

March started out much the same way February played out, with most boats getting 5-10 sailfish bite each day and a handful of tuna to fill the box.  There was nice uptick in blue marlin numbers the first week of the month as well, with our good buddy Captain Mike Alligood on his 34’ Epic even completing a Grand Slam on March 1st (1 blue marlin, 1 striped marlin, and 3 for 4 on sails).  Then, just as the coronavirus was officially declared a pandemic by the WHO, the billfish bite exploded to numbers we haven’t seen in a couple years. The 50′ Open Fly, fishing out of Los Suenos, finished the day on March 5th with 18 sailfish and 6 dorados.  The very next day the Wet Ass II fishing out of Guanacaste went 17 for 20 on sailfish. For the next ten days most of the top boats from Los Suenos and Quepos were finishing with 8-12 sailfish released each day, including several more blue marlin. CAF anglers as part of the Steve Carfora group also had an epic Los Suenos fishing experience finishing with a blue marlin, four sailfish and six yellow-fin tuna for dinner.

When the seriousness surrounding the COVID-19 pandemic started to sink in the third week of March with countries shutting their borders, airlines grounding large percentages of their fleets, and the US State Department advising people to stop traveling and come home, the sailfish had one more trick up their sleeve.  Whether this was a cruel trick to remind everyone of what we were going to miss out on or a grande finale to say “Go home. Be safe. We’ll be here when you come back.” I don’t know, but for the anglers who were still here they enjoyed one heckuva treat.  The third week of March there wasn’t a day where the top boats didn’t come back without having released 15+ sailfish, including a couple 20+ fish days by the Maverick fleet out of Los Suenos. March is traditionally one of the busiest months of the year here in Costa Rica, so it’s a shame that so many people had to go home early or cancel their trips entirely as it was shaping up to be a fantastic month.  The third leg of the Los Suenos Triple Crown was also cancelled (March 25-28), which is a pity as the boats would have had a shot a breaking the all-time record with the bite being red hot.

The inshore fishing in Costa Rica remained productive even if it wasn’t at it’s fever pitch like back in January.  Around the river mouths and islands in Quepos the huge Pacific snook gave way to higher numbers of jacks and mackerel, and while not as exotic or tasty they still put on a good show when fought on light tackle.  There were still plenty of roosterfish caught and released as well, including another by repeat angler Kerri Rader who fished out of Tamarindo for a day with legendary inshore guide Gerald.

At this point I think it’s safe to say that we’ll look back on the Spring of 2020 as a historical, game-changing time in our history.  The world hasn’t seen a pandemic like this in 100 years and apart from World Wars, I’m not sure there has ever been a situation that has completely and utterly shut down the travel industry like it is now.  When we’ll be able look back on this we still don’t know, but we are currently making history with how we react and fight this virus. I’ll end this Costa Rica Fishing Report – March 2020 with pics of our smiling clients – be safe, be smart, and we can’t wait to see you again.