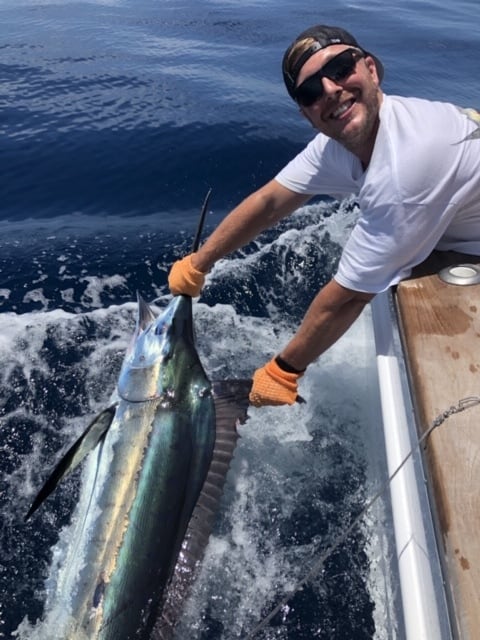 The red hot billfish bite from June carried over into July and more anglers got to see first hand why sport fishing in Costa Rica doesn’t have an “off” season.  Nicknamed the “billfish capital of the world”, this seems to be a well deserved moniker not only for the ridiculous marlin numbers we put up at the FADs but also the fact that our charter fleet truly catches sailfish and marlin twelve months a year. The peak season grabs most of the attention, but as we’ve seen year after year the months of May-August are still incredibly productive for trophy billfish, meatfish like tuna and dorado, and overall variety.  Below is our full Costa Rica Fishing Report – July 2019.

The first week of the month the sailfish bite remained surprisingly steady as most boats were getting 6-8 bites a day, including a few double digit days out from the Maverick Yachts from the famous Los Suenos Marina.  June and July are what we call our “second season” for marlin, and July 2019 didn’t disappoint as several blue and even a few striped marlin were landed.  During the middle of the month the sailfish bite slowed down and boats were getting just 3-5 bites per day, leading many to think the season must be over and it’s too late in the year to have good billfishing.  Then the final two weeks of the month the sailfish bite ratcheted back up and the top boats were getting 7-12 bites a day again.  Between last month and this month, the billfish bite in the “off season” has been every bit as good as it was during the “peak season”.

The inshore and bottom fishing remained steady as well with plenty of snapper and grouper being hauled up from our deep drop points.  Last but not least, the now-famous marlin fishing at the FADs was going off as we had reports of 30-marlin trip on the Sea Fly as well as a 22-marlin trip from the folks aboard the Pescadora from Quepos.  Below is our full day-by-day.?