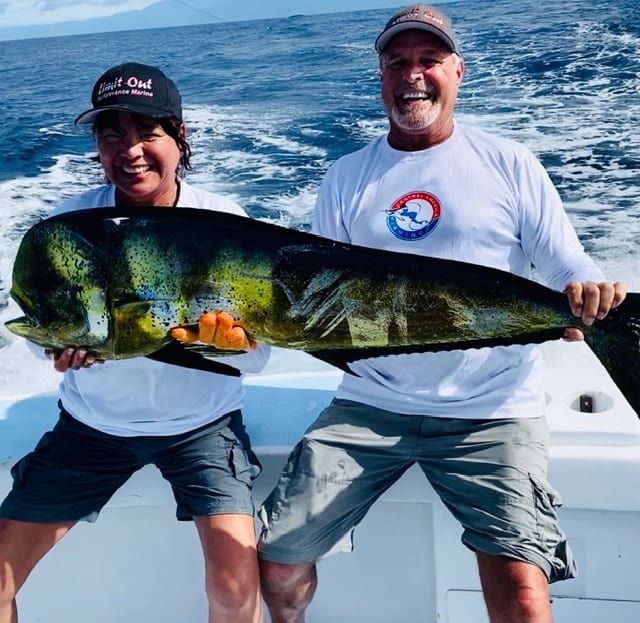 The 2020 peak season is officially underway and we are busy fishing!  As many of you know, our peak billfish season is traditionally Dec-Apr, and January is always one of the best months of the year. The billfishing last month overall was good, there were some long, slow days and some wide open days, but overall it would be a fair assessment to say that January didn’t provide us with the action packed billfishing we have grown accustomed to down here. Read our full Costa Rica Fishing Report – January 2020 below.

The first half of the month most boats were finishing with an average of 5-7 sailfish releases each day, and there were still plenty of marlin around (most of them blues).  The first leg of the Los Suenos Triple Crown was hosted from Jan 15-18, and 38 boats released a total of 593 billfish (523 sails & 70 marlin). The third week of the month had a bit of a lull to it with many boats finishing with just 2-4 sails, and several came back with none.  The bite got back to respectability the final week of the month with more reports of 5-8 bites per day out of the Los Suenos & Quepos marinas. 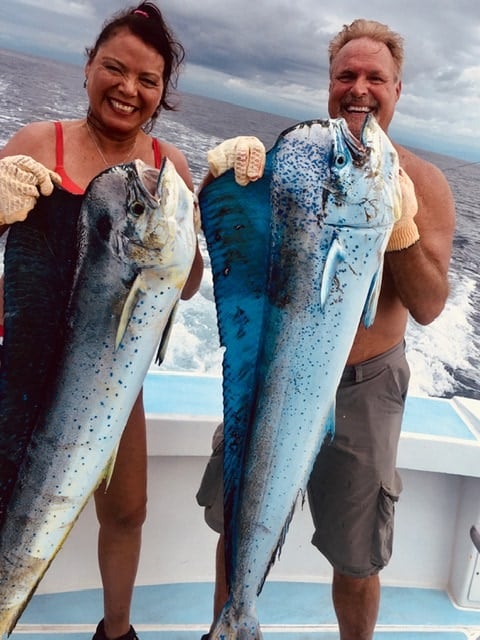 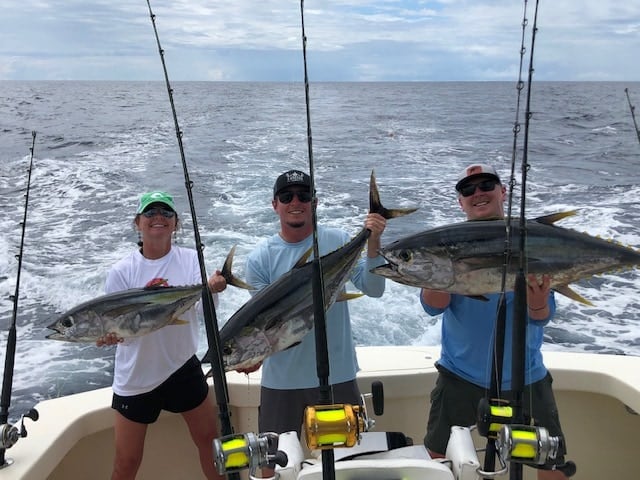 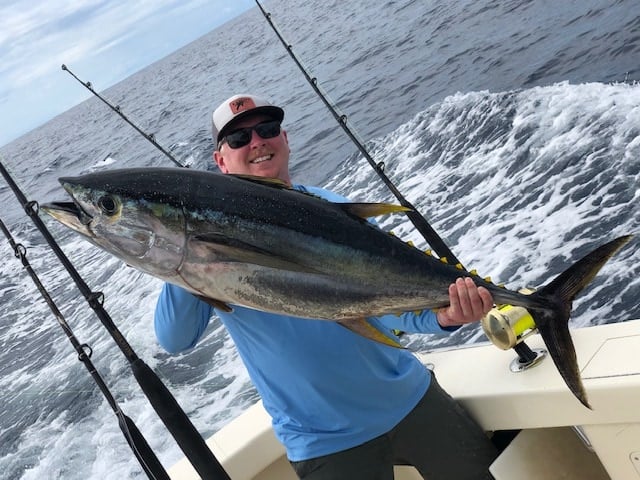 While the billfish numbers alone may not have qualified as headline-worthy news, the saving grace yet again was the daily presence of big dorado (mahi) and schools of yellow-fin tuna. Ever since the “Tuna Decree” in 2017, when the Costa Rican government limited foreign purse seiner licenses from 40 down to 8, the “meat fishing” has been as good as anyone can remember.  Most days boats were coming home with a healthy haul of yellow-fin tuna and/or a couple nice sized dorados for dinner.  Our buddy Captain Tom had a 15-tuna day on Jan 29 and reports of 20+ tuna caught in a day weren’t uncommon either. As long as you weren’t dead-set on racking up huge sailfish numbers, last month the offshore fishing was pretty good overall thanks to a nice variety of trophy pelagics. Below is our daily report from some of the top boats each day:

While the sailfish numbers were far from their all time highs, I’m not sure I can remember a better season for roosterfishing than we’ve seen so far in early 2020.  It seemed that nearly every day our dedicated inshore captains were putting anglers on the inshore marauders, including a few double digit days. On January 23, one of our favorite boats out of the Los Suenos Marina, Sunny One, released an incredible 24 roosterfish in a single day!  Better than the numbers, the roosters last month were not all baby “chickens”, we saw several 40-50 lb fish on a weekly basis.  We had two groups, Mark & Connie in Quepos and Kris & Randy at Los Suenos, who caught so many roosters they lost count and didn’t give me an exact number! 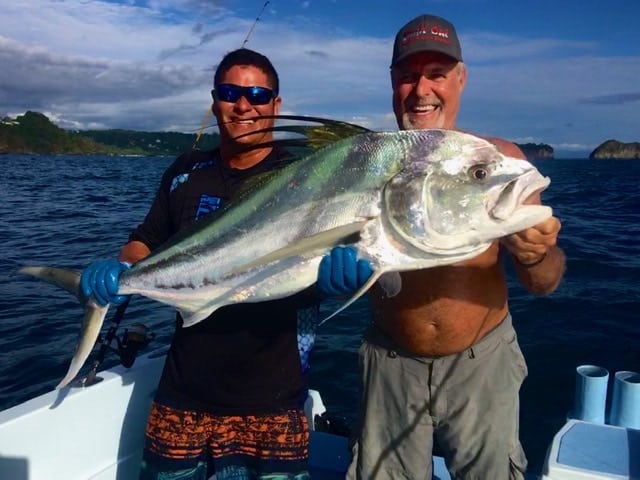 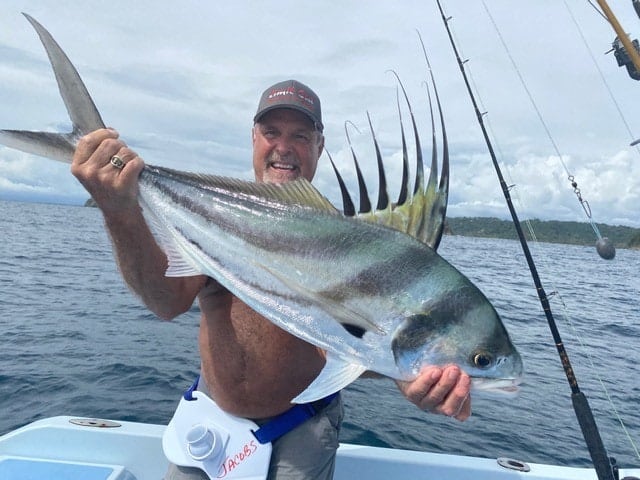 The inshore fishing was red hot, but it wasn’t just roosterfish that were making people smile. The Pacific snook bite has also been phenomenal this year with several clients landing 30 lb+ fish near the river mouths in Manuel Antonio. One of the many things we love about Costa Rica is that there are so many different venues to fish and so much variety that there is almost always great action to be enjoyed whether it’s inshore, offshore or bottom fishing. 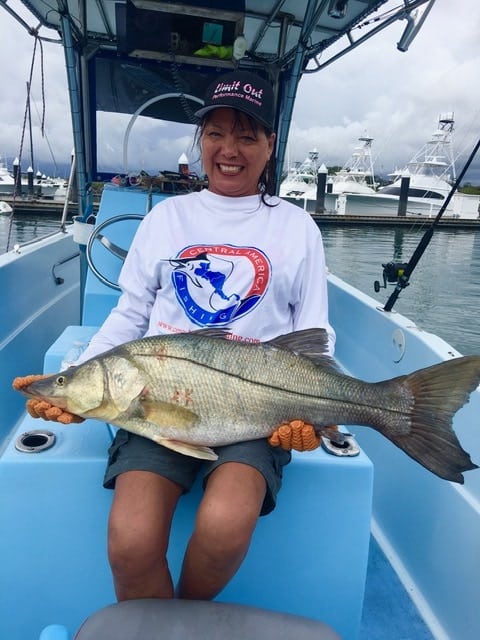