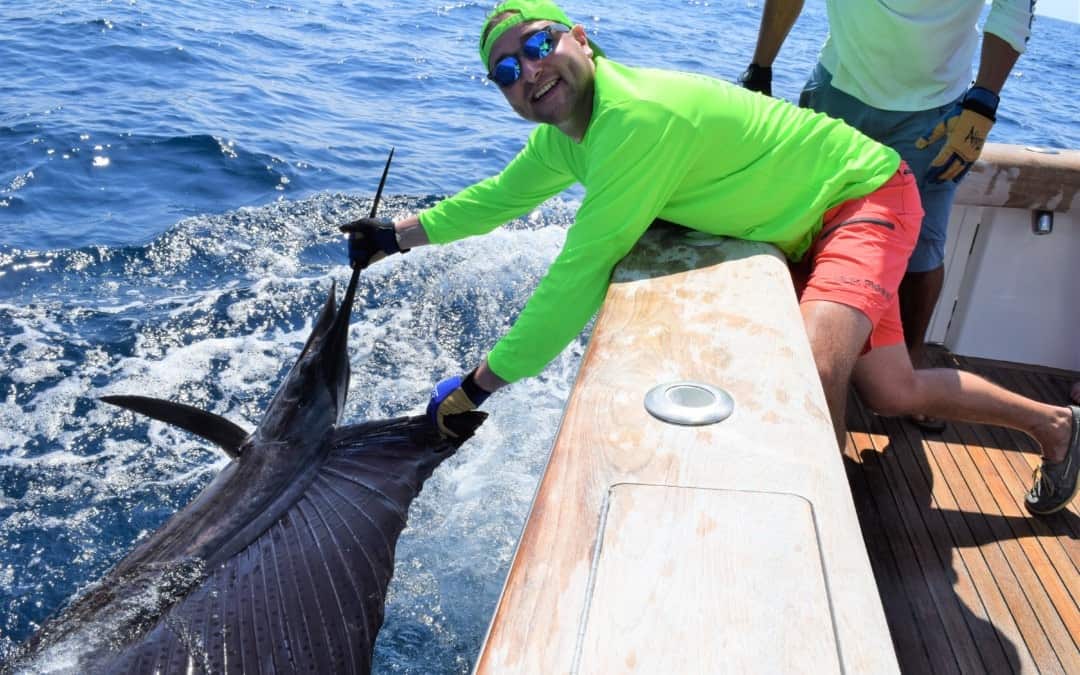 The fishing here in Costa Rica last month picked up pretty much right where January left off with plenty of marlin still around and good sailfish numbers the first half of the month. The Costa Rica Fishing Report – February 2019 says fishing was consistently good, as long as you could locate the fish you were in for a day full of action. The problem was there were several reports from some charter boats who only fished 20-25 miles out and suffered through long days with little action, but for the boats who weren’t afraid to burn gas to find the fish the action was red hot 35-45 miles out. Three boats completed grand slams last month out of the Los Suenos Resort & Marina and the Marina Pez Vela in Quepos – including the very rare Super Slam by our friends at Hoo’s Your Daddy.

The second half of the month the sailfish bite went wild and reminded everyone why Costa Rica earned the nickname “billfish capital of the world” with several 20+ fish days and most boats finishing with double digit sailfish. This is fairly “by the book” as typically we see the most marlin in the months of Dec-Jan-Feb and then sometime in Feb the sailfish bite explodes and the marlin bite drops off. It looks that that happened here right around the full moon on Feb 19th as the top boats were seeing 20+ sailfish a day.

Better evidence of that was the perfectly timed second leg of the Los Suenos Triple Crown took place from Feb 28 to March 2nd. The first day the fleet put up record-setting numbers with 742 billfish released by 45 boats (737 sails and just 5 marlin). To put that in perspective – last month in Leg 1 the fleet released 648 billfish total for the three day tournament. The second day the anglers & sailfish both moved a bit slower with just 580 released, but the tournament finished with a bang as another 741 bills were released on Day 3. In total 2,063 billfish were released (2,042 sailfish & 21 marlin) in the three day tournament with Team Galati taking home the crown.

Last month even more 200+ lb tuna were caught again last month. As mentioned in last month’s report, the new purse seining laws here have seemed to have an immediate impact on Costa Rica’s tuna fishery as the last three years have been phenomenal. In addition to yellow-fin tuna, trophy sized mahi were caught on a daily basis and even a few wahoo made it to the gaff. The inshore fishing remained strong as well with more anglers landing jacks, mackerel, and snapper on a daily basis along with plenty of 20-50 lb roosterfish to send anglers home happy.

Below is the full Costa Rica Fishing Report – February 2019 with highlights from the best boats each day.