Can I Bring Fish Home With Me? 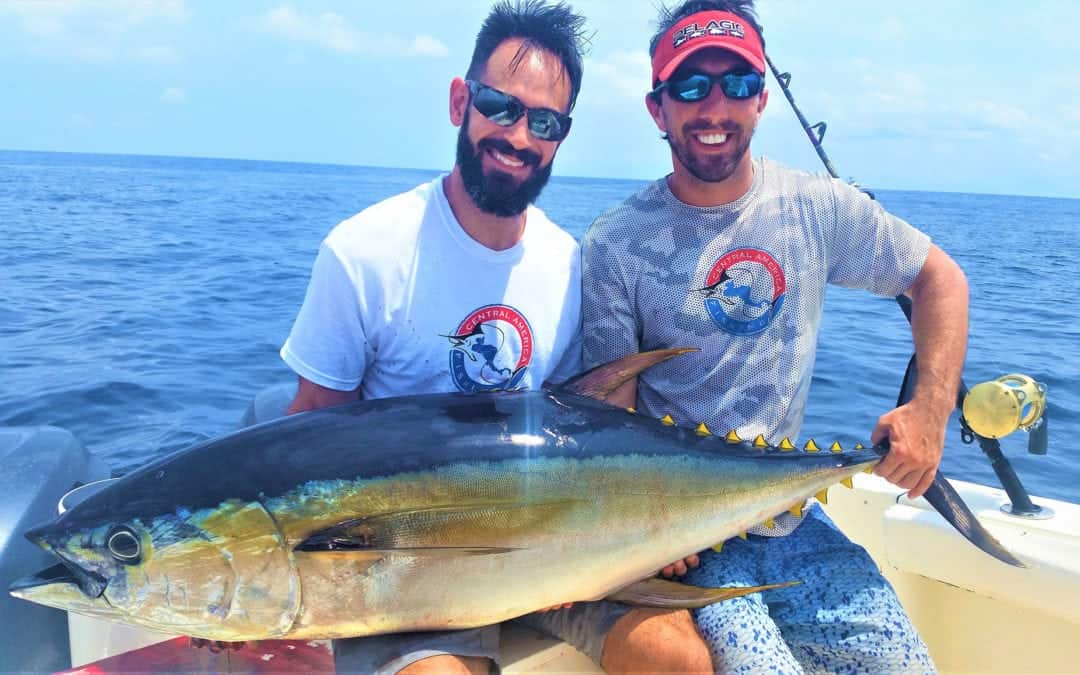 Anglers from all over the globe flock to Central America every year in search of a bevy of trophy fish.  A Costa Rica fishing vacation to target sailfish and marlin offshore or roosterfish and tarpon inshore, Panama’s famous yellowfin tuna fishery, even bonefish and permit fly fishing in Belize – you can check off quite a few species from your bucket list right here in Central America. However each year just as many anglers visit Central America in search of tasty meatfish like yellowfin tuna, dorado (mahi-mahi), wahoo, snapper, grouper, snook, and more. As you might expect, one question we hear quite a bit is “can I bring fish home with me?”

The answer is ‘Yes’, you are allowed to fish back home with you. Before you start dreaming of filling your freezer with tropical game fish however you need to know which species are protected and which fish are legal to become table fare.  In Costa Rica, Guatemala and Panama, all billfish (marlin and sailfish) are strictly catch-and-release and are protected by law.  In 2008 Belize became the first country in the world to pass a law that makes all bonefish, permit, and tarpon strictly catch and release species.  In addition to the legally protected species there are several others that are released by most captains for the purpose of conservation and the survival of a prized game fish.  In Costa Rica and Panama, roosterfish would be at the top of the list due to their incredible fighting ability and immense popularity. In recent years, there has been a big push in Panama to release all cubera snapper due to their notoriously slow growth rates and reproduction cycles.

The question of ‘can I bring fish home with me?‘ is as much a question of legality as it is logistics. First things first, is it actually legal to bring the frozen fillets back into the US?  Yes.  US Customs and Border Patrol does require you to declare that you are bringing food/meat into the country, but they have no problem with you bringing back fish for personal use as long as it’s not an endangered species of course!   At the point of entry they’ll ask where you were, how long you where there, and what items you declared. Once again just tell them you were on a fishing trip to Central America and you are bringing back frozen fillets and most of them will simply wish you a safe journey home. I’ve even had some agents ask me about the trip, how much it cost, and when’s the best time to go!

There is one more catch, however.  Just because it is legal doesn’t mean the airlines will allow you to fly with it.  Currently most major airlines have no restrictions on bringing fish back.  The only one that we know of that does is Jet Blue.  We highly recommend that you call or verify on the airline’s website that it is OK to fly with fish, because even if it’s legal to bring it back if they won’t allow it on the plane in the first place you are still out of luck.

So we’ve answered the first half of the question ‘can I bring fish home with me?, yes it is legal, but how does it physically travel thousands of miles from Central America back to your kitchen?  Many of our anglers have fished in Alaska and had fillets mailed back to them, but it’s an understatement to say that the infrastructure of Alaska and Central America is about as different as their climates. Unfortunately, in Central America there is no option to put your fish on dry ice or smoke them and ship them back to your front door in a tidy UPS box so you’ll have to do it the old fashioned way – bringing it back yourself!

The first thing you’ll want to do is to have your fillets frozen solid before your flight home.  Depending on your accommodations, you may have a fully furnished kitchen with your own freezer, but if not your hotel or fishing lodge will be glad to put your catch in theirs for you.  Some lodges offer vacuum sealed bags, if not a quality zip-lock bag will work just fine.

Next, you’ll need a cooler to transport the fish back home with you.  All you really need is a small plastic cooler, which you can either bring down with you or buy here at a local store for $15-$20.  I’d highly recommend a plastic cooler over a cheap styrofoam cooler because they’ll keep ice longer and, more importantly, they can handle more banging & jostling while in flight.  Have you ever seen the way those baggage handlers toss luggage around?  You don’t want to see your prized yellowfin tuna spilled all over the tarmac as you watch helplessly from seat 30A.  Better yet, spend a little bit more and buy a quality travel cooler like a Yeti Camino or Yeti Hopper as they will keep ice cold for days and have leak proof zippers. Plus, they will last for years so you each time you come back to fish you can simply bring this with you and trust that it will keep your fish frozen and your luggage dry.

When it’s time to go simply collect your frozen fillets, wrap them in newspaper, and fit as many as you can into your cooler. Don’t forget to leave room for plenty of ice and you should be stress free for 12-24 hours depending on the cooler you use.

When I bring fish back with me I prefer to put it in my checked luggage.  This way I don’t have to carry it all day and it stays even colder in the cargo hold.  The cargo hold of most planes stays around 40-50 degrees F, so the cooler the temps only help your cause of getting home with your fish still being frozen solid.  The other major reason I check my cooler full of fish instead of bringing it as a carry on is to avoid the risk of having it confiscated at security checks.  With today’s strict carry on policies you don’t want to risk losing your prize catch, and cooler, to a grumpy TSA agent who doesn’t know (or doesn’t care) about the rules. They certainly have a lot to deal with every day, so it’s always a risk that one of the agents could tell you they won’t allow it even though it’s legal. The cons to putting fish in your checked luggage is that you don’t have your eyes on it while you travel, so if baggage handlers get too nosey they might relieve you of the frozen delicacies (not common, but it happens!). Your cooler could also somehow open during your day and travel which could leave you with clothes that are wet and smell a bit fishy.  If you don’t shell out money for a quality leak proof cooler, I’d recommend you at least get packaging tape and tape the plastic cooler shut.

How do I know all this?  Just like the fishing vacations I book for my guests, I’ve done it many times myself from both Costa Rica and Panama.  My family still lives in Wisconsin, so many times in the past decade I’ve flown home with a bounty of fresh fish to share with them.  My travels would entail arriving at the airport a few hours before my flight, a 3 hour flight to Houston/Dallas/Miami/Atlanta, a 2-3 hour layover, another 3 hour flight to Chicago’s O’Hare Airport, and then a 2 hour drive to my parent’s house in Wisconsin.  Every single time I’ve done it my fish has been frozen solid without a hint that they were beginning to dethaw, much less go bad on me.  I most recently brought home tuna and dorado all the way to my cabin in northern Wisconsin after my Panama fishing vacation in May and we enjoyed fresh sashimi by the lake!

Like all conservation-minded anglers, we love catch-and-release fishing as much as the next person, but certainly one of the joys of sport fishing is providing for yourself and being able to cook your catch.  If you catch table fare on your next Central America fishing vacation I always recommend having the hotel or a local restaurant cook it for you one night because few things beat fresh fish cooked with local flavor, but should you have enough to bring back with you by all means please do!