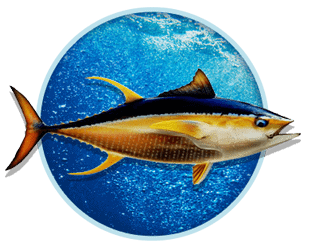 It’s a question we hear every month, if not every week – when is the best tuna season in Panama?  Panama has one of the world’s best yellow-fin tuna fishing destinations thanks in part to world famous hot spots like the Hannibal Bank and Coiba Island, a reliable 5-6 month long season, and certainly Panama’s conservation efforts like outlawing purse seiners in 2010.  Many big game anglers have a giant ‘cow’ yellow-fin tuna on their bucket list while others wan to experience the excitement and chaos of casting into a frenzied school of feeding tuna with light spinning gear, and there is no better place to make that happen than Panama. Similar to Costa Rica, Panama has two weather seasons – the dry season (December through April) and the green season (May through November).   The peak billfish season coincides with the dry season months, while Panama’s peak tuna season straddles both weather seasons.  According to Captain Kerry Leggett, owner/operator of Come Fish Panama in Boca Chica, the peak tuna season runs from March to August.

“In March and April we see the tuna in big numbers again, though they are typically smaller (50-100 lbs).  The months of May/June/July is when catch our cow tuna (200-300 lbs).  We catch them at a record pace in May and June.  In July and August the tuna are still there, but we have less anglers fishing for them as they don’t want to deal with the rainy season.” As with tuna fishing in most other parts of the world, dolphins and birds are an easy way to locate them.  More often than not huge pods of spotted dolphin show up in the Gulf of Chiriqui every March as they follow the bait balls and then they’ll feed symbiotically with the yellow-fin tuna for months.  Birds like frigates and brown boobies can easily spot this commotion from above and get in the action,  which is what most captains look for on their runs out to the fishing grounds.  In Panama this tends to happen at the world famous hot spots like Hannibal Bank, Isla Montosa, and Coiba Island – all of which provide structure and a welcome respite from the open ocean for juvenile fish and bait fish.  After the bait balls and dolphins move out of the area large schools of tuna still hang around the Hannibal Bank area feeding on smaller pelagics and crustaceans like squid for a few more months.  Even once they move on the local ‘resident’ tuna can still be caught every month of the year in and around the Gulf of Chiriqui, so if you are sport fishing in Panama chances are good you’ll bump into a few tuna during your stay – but those odds increase greatly if you are fishing between March and August.