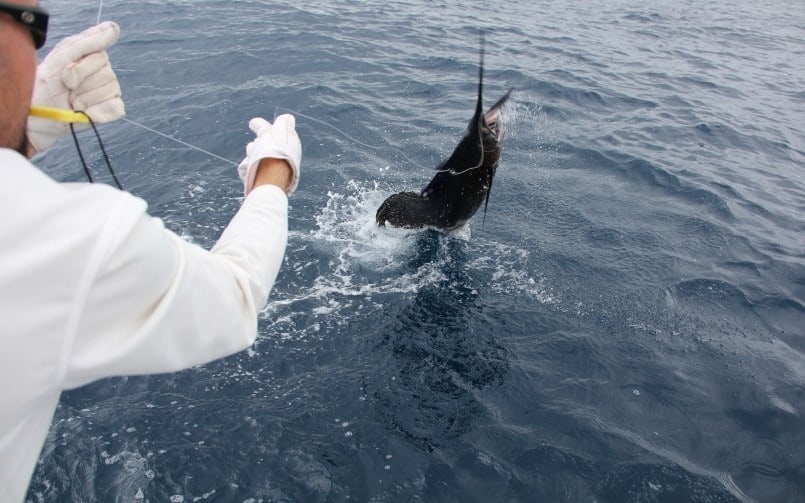 Sport fishing in Costa Rica is well known to be some of the best in the entire world, and it’s a reputation that is well deserved.  The tiny Central America country is home to world class tarpon fishing on it’s Caribbean Coast, numerous freshwater species in exotic locales, and of course world class billfishing.  More than that, with the diversity offered in fishing venues there is never a bad month to visit as fish are caught all year round.   Below is a list of the top fishing destinations in the country and the species you’ll catch there.

The Los Suenos Resort & Marina is the crown jewel when it comes to sport fishing in Costa Rica.  Nestled in Herradura Bay along Costa Rica’s Central Pacific Coast, it is located just one hour from the SJO International Airport.  This 1,100 acre property features an 18-hole golf course, a 600-acre nature reserve, a beautiful beach club, a marina village with boutique shops, a spa, and grocery & liquor stores, six restaurants and bars, and finally over 500 private residences and luxury condos.  These privately owned 1, 2, and 3 bedroom condos and the luxury private homes make Los Suenos the ideal location for your next fishing vacation to Costa Rica.

The calling card of the Los Suenos Resort however is their 201-slip marina which is home to some of the finest fishing boats in Central America.  The fleet ranges from 26′ center consoles to 60′ luxury yachts, many of which are award winning boats and feature tournament hardened crews.  The sport fishing out of Los Suenos is some of the best in the world as offshore charters commonly reach double digit sailfish releases in addition to endless catches of dorado, wahoo, and yellow-fin tuna.  Marlin are caught all year round with Nov-Jan and May-July being the top months.  For the hardcore anglers chasing marlin,  overnight trips to offshore sea mounts are becoming more and more popular in recent years with the marlin bite being the stuff of legends.  If offshore fishing no longer interests you there is no need to worry, many captains at Los Suenos specialize in bottom fishing for grouper, snapper, and amberjack at the various offshore reefs.  If you only have a half day to get out on the water you can chase mackerel, snapper, jacks, sea bass, and if you are lucky – roosterfish.

If you need more convincing of how amazing the fishing at Los Suenos is then just use their Los Suenos Triple Crown Tournament as a guide.  This annual three leg, three day tournament is hosted every January, February and March and features 40-45 of the best boats in the region.  In the 2014 edition of the tournament the January leg saw an astonishing 2,171 billfish released in three days while the February leg followed with another 1,060 and March closed with 1,847 billfish released. An hour south of the Los Suenos Resort you’ll find one of the most prolific fishing destinations in Costa Rica, Quepos.  Traditionally known as the ‘fishing capital of Costa Rica’, Quepos was the place to go before the modern Los Suenos Resort was opened a decade ago.  Not to be left behind and forgotten, in 2012 Quepos finally opened it’s brand new Marina Pez Vela with serious plans of providing stiff competition to the Los Suenos Marina.  Also home to the famous Manuel Antonio National Park, this area is the quintessential destination for first time visitors to Costa Rica as it offers beaches, rain forest, wildlife, luxury hotels, and of course great fishing.

People have been sport fishing in Quepos since tourism first started to gain traction in Costa Rica decades ago.  In fact it was these calm waters and prolific billfish numbers helped put Costa Rica on the map in the 70 and 80s.  During the peak season it is a common occurrence to raise 10-20 (or more!) sailfish a day and there are always marlin around.  The billfishing is so good that Quepos has hosted an annual billfish fly fishing tournament each of the past 14 years.  The popular “Veintisies” pinnacle is a known hot spot for wahoo and big snapper as well.  Quepos also offers some of the country’s best inshore fishing for a variety of species including snook and roosterfish.  Last but not least, the jungle rivers near Manuel Antonio provide the perfect setting for river float trips for a variety of freshwater species.  The fly fishing trips are as scenic as they are fun, and if you aren’t a fly angler you can always use super light tackle and fish the same way.

As with Los Suenos, one needs to look no further than the international fishing tournaments held here to realize that the sport fishing really is first class.  Mentioned above, you know the sailfish numbers are as thick as sardines if the annual fly fishing tournament is in it’s 14th year.  On a bigger stage, the Offshore World Championship has been hosted at the Marina Pez Vela the past two years and it coming back for it’s third year in 2015.  Arguably the largest sport fishing tournament of the year, 64 of the top teams from around the world fished for four days in April 2014 and tallied 2,739 billfish and landed 79 dorados. Located in the Guanacaste province in northwest Costa Rica, Tamarindo is your classic beach town.  Pangas line the shoreline, surfers dot the breakers, and swimsuit clad beach goers are everywhere.  With talk of all the state of the art marinas in Costa Rica, fishing in Tamarindo is a refreshing take on the way it used to be.  There is no marina in Tamarindo so the sport fishing boats are all moored behind the island in the south side of the bay.  To get to your boat you simply walk from your hotel along the beach, board a panga in the surf, and ferry out to your waiting private charter.

Tamarindo is one of Costa Rica’s hottest fishing destinations thanks in part to favorable geography and weather.  Playa Tamarindo is one of the western most points in Costa Rica so the run time to the continental shelf is often less than 30 minutes.  Due to the fact it’s located in Guanacaste, the hottest and driest region of Costa Rica, it receives very little rainfall all year and actually experiences it’s best fishing during the green season months of May-November.  If you are looking for beautiful beaches, hot sunny weather, and want to avoid the marina crowd then Tamarindo could be the perfect fit. Switching coasts and fisheries, one has to mention Tortuguero when they talk about sport fishing in Costa Rica.  The tarpon fishing in Tortuguero is some of the best in Costa Rica and yet often times is still overlooked due to big name tarpon lodges north and south of this eco-touristy town.  With miles upon miles of freshwater canals and lagoons, huge river mouths, and warm Caribbean waters the tarpon here are as numerous as they are mammoth sized.  Here 80-100 lb tarpon are the norm and every year some lucky (or unlucky, depending on your point view) angler lands a 150-200 lb behemoth.  Fishing with local English speaking guides and no other boats in site make tarpon fishing in Tortuguero an experience anglers come back for year after year. For the fishing savants out there fear not, Costa Rica isn’t all about trolling for big game sailfish and marlin.  The 33-acre Lake Arenal provides a gorgeous setting for exciting fresh water fishing for species like machaca, tilapia, and the prized rainbow bass.  This man-made lake, formed in 1979 to produce cheap hydroelectric power for the region, contains endless pockets, fingers, and river mouths that provide habitat for these fresh water species.  Machaca have earned the nickname “mini tarpon” for their acrobatic jumps while rainbow bass are one of the hardest fighting freshwater species you can find.  Whether you are casting plugs and crank baits, fly fishing, or trolling deeper water for the big rainbow bass it’s hard to beat the bite and the beautiful scenery.  Few things will compare to an early morning on a glass-flat lake in front of the imposing Arenal Volcano with the sound of howler monkeys waking up. Costa Rica’s final frontier, the Osa Peninsula, is one of the last bits of undeveloped coastline in the wildly popular country.  Comprised almost entirely by the 164 sq mile Corcovado National Park, National Geographic has referred to this area as ‘the most biologically intense place on Earth.’  The wildlife here is almost unparralleled anywhere else on the planet as you’ll find hundreds of species of birds, reptiles, some of the most venomous snakes in the world, crocodiles, and mammals big and small including tapir, jaguar, monkeys, sloths, and pumas.

As you might expect, the sport fishing here is fantastic.  The combination of little human influence, abundant marine life, and even fewer sport fishing boats make fishing in the Osa Peninsula an exciting venture.  Over 40 IGFA records have been set within 80 nautical miles and it could probably be even more if there were more boats fishing these waters.  Marlin and sailfish are found offshore as well as great numbers of yellow-fin tuna.  The numerous reefs and pinnacles make for some of the best dive spots in the country as well as great spots for wahoo fishing, roosterfish, and giant cubera snapper.  If you want nightlife and luxury resorts you can look elsewhere, but if you are looking for incredible nature and plenty of fish that can bend your rod then try the Osa Peninsula out on your next fishing trip to Costa Rica.